(Click on any image to view a larger version.)

Many genealogists are familiar with using the tools at DNA Painter to find clues to the possible relationship when the relationship is not known between two DNA test takers. The clues are based on how much DNA in centiMorgans (cM) the two share. The tools can also provide evidence to disprove or support a known relationship. Anyone who has worked with DNA for very long knows that what we “know” or “believe to be true” may be disproven by DNA evidence. Even when we think a relationship is known based on family memories, the conclusion is more sound with supporting DNA evidence.

The data displayed by the “The Shared cM Project 4.0 tool v4” at DNA Painter (https://dnapainter.com/tools/sharedcmv4) is a collaboration between Blaine T. Bettinger, Leah LaPerle Larkin, and Jonny Perl.

“The Shared cM Project 4.0 tool v4” provides three data elements for analysis of relationship possibilities based on the amount of autosomal DNA (atDNA) shared by two test takers: Details are provided here for using these data elements on an example case where BJ04 shares 111.32 cM of DNA with DP5, known to be a first cousin twice removed (1c2r).

Entering 111.32 into the tool highlights the blocks for many possible relationships (some shown in figure 1) that can share this amount of DNA. The 1c2r block is one of those highlighted. This block indicates 1c2r share an average of 221 cM, with the reported range being 33-471 cM. 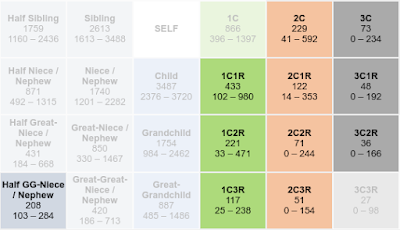 Random recombination of DNA can result in some test takers sharing more or less than the expected amount of DNA for a specific relationship. Relationships more distant than second cousins may result in no shared DNA at all even though the genealogical relationship is real.2

In cases like this, with a 9% probability, more information will be needed. 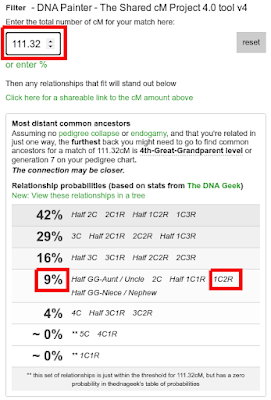 Histograms are displayed by clicking on a relationship box in the Shared cM Chart on the DNA Painter website. The histograms, illustrated in figure 3, are used to determine if the amount of shared DNA is at the peak of the curve, within the curve, or an outlier on the far shoulders of the histogram curve. Shared cM values that fall far out on the shoulders of the histograms or outside of the reported range are known as outliers. Outliers require additional investigation and more evidence to be accepted as true; often more test takers are needed. Outliers will often lead to more tentative or qualified hypotheses and need more explanation in the analysis.3

Figure 3 is an annotated image of the histogram displayed for the 1c2r relationship. The added red markings indicate the peak of the curve, position of values described as “within the curve,” and outliers (on the shoulders) of the curve. Numbers outside of the range of shared values are also considered outliers.

To determine where on the curve a DNA match falls, look along the horizontal axis for the numbers closest to the amount of DNA shared by two test takers. Mentally note the location for the shared cM number on the horizontal axis. Mentally draw a line up to intersect the curve. Determine if the amount of DNA shared by the two test takers is at the peak or within the curve of the histogram or if the value may be an outlier (on the shoulders of the curve or outside of the range of the curve). 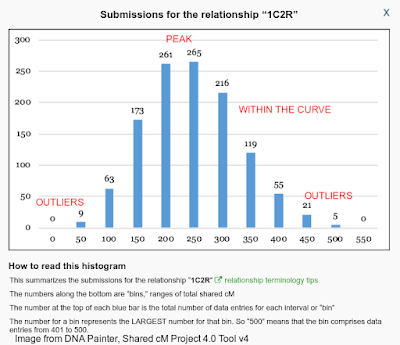 Figure 3. Annotated image of the histogram displayed by the Shared cM Tool on DNA Painter for the 1c2r relationship.


Table 1 correlates the information gathered so far about the relationship between BJ04 and DP5—shared DNA amounts from the testing company website and also Shared cM average and range, probabilities, and placement on the histogram for the known relationship from DNA Painter.

Again, more evidence is needed. Additional family members can be tested or the DNA match list may contain serendipitous matches that add evidence to this analysis.

These numbers also demonstrate the amount of shared DNA between the siblings and their first cousin is consistent with their relationships to each other. The numbers are within the Shared cM ranges and well within the histogram curves.

All of these added cousins share more DNA with BJ04 than DP5 shares (see the row or column for BJ04 in table 2). Entering these cM numbers into the Shared cM Tool on DNA Painter indicates a 1c2r relationship probability of between 34% to 62% (see table 3).

Table 3 correlates the information gathered so far about the relationship between BJ04 and all other test takers in this study—shared DNA amounts from the testing company website and also Shared cM average and range, probabilities, and placement on the histogram curve for the known relationship from DNA Painter. 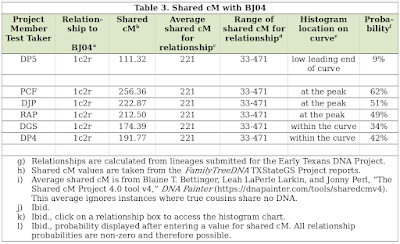 Together, the DNA and documentary evidence strongly support the hypothesized relationships even though, alone, the amount of DNA shared by BJ04 and DP5 was not conclusive.

This is a clear case where testing siblings and first cousins can provide DNA evidence to help answer some questions. The 111.32 cM shared by BJ04 and DP5 is low on the histogram curve. This number is not far out on the shoulders of the histogram, but it is definitely on the waning, low end of the curve.

Astronomer Carl Sagan made the statement, “extraordinary claims require extraordinary evidence." Wikipedia calls this statement the “Sagan standard” and tells us, "The standard illustrates a core principle of the scientific method and skepticism and can be used to assess the validity of a claim." Sagan wasn't the first to make this claim, but Cosmos may have been the first exposure for many of us.4

For more information on the randomness of DNA inheritance see my earlier blog post, "DNA Analysis - Random is the Most Important Factor," Deb’s Delvings in Genealogy, 9 October 2017 (http://debsdelvings.blogspot.com/2017/10/dna-analysis-random-is-most-important.html).


All statements made in this blog are the opinion of the post author. This blog is not sponsored by any entity other than Debbie Parker Wayne nor is it supported through free or reduced price access to items discussed unless so indicated in the blog post. Hot links to other sites are provided as a courtesy to the reader and are not an endorsement of the other entities except as clearly stated in the narrative.

21 September 2021: Corrected some citations where italics were not copied into the blog.