Note: All images are screenshots captured by Debbie Parker Wayne. Where names of living people are include, permission was obtained.

Be aware: Genetic Communities is clearly marked as a "beta" resource. It will change over time and changes have already been seen in the community makeup, names, and assignments since the rollout.


This week AncestryDNA unveiled a new tool for DNA test-takers—Genetic Communities. This tool may clear up some of the widespread misunderstanding of admixture prediction. Admixture predictions are based on where our ancestors may have been thousands of years ago—a period for which few genealogists have documentary evidence. Genetic communities are where our ancestors were within two hundred years (more or less)—a period for which most genealogists have documentary evidence.

Quick! Take advantage of the chance to learn about Genetic Communities for free through until 6 April 2017 by viewing this informative webinar recording. There is a fee to view after that date.


On March 20th on Facebook Blaine asked each of us to predict what our Genetic Communities (GC) would be. My prediction was Upper South and Lower South:

This prediction is based on the birth states of my ancestors shown in the chart below. A Facebook friend started a meme a year or so ago. He had us creating four to six generation pedigree charts listing only the birthplaces of ancestors and color-coding the blocks. Here is the chart I posted last year (I have filled in a few of the question marks since then with ancestor names). It shows all of my ancestors born in the South back to the early 1800s. Earlier generations are not shown here, but they are in the southern United States as far back as I have traced each line. I have one lone fourth-great-grandfather who was supposedly born in New York in about 1800 and was in Mississippi by 1810 to 1820.

My GCs are exactly what I predicted. The names assigned by Ancestry are not Upper South and Lower South. The expected Southern states are included in the GCs which have been given more descriptive names by AncestryDNA. 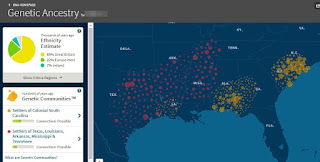 So how do these GCs help me with my genealogical research? For me, I get few new clues as to locations of ancestors after the late 1700s. Someone with a less extensive tree may get clues as to which states their ancestors came from.

Clicking the Connections button, I do get some clues as to potential European origins of most settlers in the areas where my ancestors settled in the New World. These clues agree with the family stories that have been passed down of ancestral origins in Germany, England, Scotland, and Ireland.

I see a list of surnames that are found more often in this GC than outside of it. I can use the "View All Matches" button to see which of my DNA matches are also part of this GC.

This match list contains only DNA matches who are also part of this GC. A match with a shallow tree may be able to get some clues from the ancestors in my tree that are in this GC.

Back on the window with the GC Stories, if I click on one Year Span in the community story bar I can see which of my ancestors were in this community during that time span. I can use the left and right arrow keys next to the year span to cycle through all year spans. 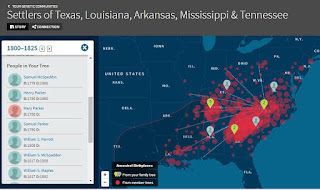 I can zoom the map in to see finer detail. I can click on a "pin" on the map to see which ancestors are associated with this pin. 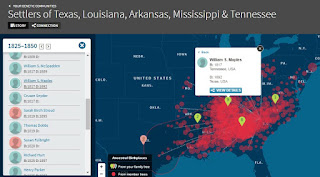 As of now, all of my ancestor pins only narrow the locale down to a region of a state. This may be because my tree on Ancestry does not include county level details for all events. However, if Ancestry plans to extend this GC tool to show us our ancestors and ancestors of our matches in the same or nearby counties, I may be tempted to share more of the details in my tree on Ancestry. (I never had a tree on Ancestry.com until I took a DNA test with them and wanted to use some of the DNA tools that require a public tree. I only took the time to enter a barebones tree with ancestors; no collaterals; basic birth, marriage, death info; and states only for some locations. At least once RootsMagic can sync with Ancestry it will be easier to update an Ancestry tree if I decide to place all of my data online.)

It is helpful to see which of my ancestral lines were in the same or nearby counties at the same time. This is a great by-product of the GC maps. Before now, I had to use other tools to map where my ancestors were at any given time.

For details on the science behind Genetic Communities and how others have used GCs see these resources.