Yesterday I wrote about the online exhibit on the construction of Texas highways at Texas State Library and Archives Commission. I mentioned my great-great-grandfather who built roads according to family stories my grandmother told me in the early 1990s.


... my grandmother told me her grandfather built roads in East Texas, Arkansas, and Louisiana, and that he died while working on a road in Arkansas when a snake spooked his horse. Grandpa fell and was killed, perhaps from a broken neck, when the horse reared in panic. My grandmother was only seven when this happened so I am not sure how much she remembered or how often her memory may have been refreshed by discussions at family gatherings after she grew up. Her memories of getting soaked while traveling from Dallas to Smackover, Arkansas, in an open-top vehicle in a rain storm in August 1923 seemed pretty vivid.


I have an old 1910–1923 photograph of this great-great-grandfather with family and crew members standing in a wet, muddy, grassless area surrounded by trees. This looks like it could be a road building crew of the time or maybe they are just pulling felled trees to the railroad line for transport. It's hard to tell from the image. 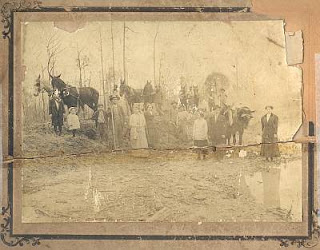 The crewmen are each holding a team with yokes around their necks and ropes and chains leading to the ground where there are large squared-off timbers—maybe to grade a dirt road. I'd love to hear from anyone who knows the history of road building or logging who can identify what these rigs may have been used for. The squared off timber argues they are not pulling felled trees for transport. 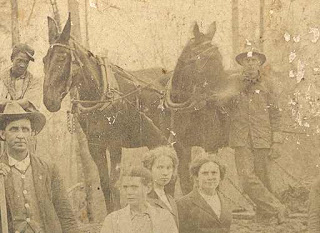 Here's a closeup of great-great-grandpa Henry Everett Johnson (1871–1923) and his wife Emma Eugenia Ryan Johnson (1868–1950) cropped from the image above. It is so strange to see I am several years older than the 52 years of age Henry was when he died. We tend to think of our ancestors as being older than us and often forget they were once children themselves. 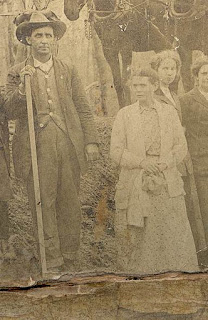 Henry's life span dates are documented on his tall Woodsmen of the World headstone at Ryan Chapel near Diboll, Angelina County, Texas. Emma's are documented on her Texas death certificate, number 6051 (1950), available from the Texas Department of Health, Bureau of Vital Statistics, Austin, and now in several places online. Emma is buried next to Henry, but the only marker on her grave is a small, flat stone barely big enough for the initials "E. J." inscribed on it. If you visit the cemetery when the grass is high or when there is snow you'll miss her stone.

The photograph of what I think is the road crew is in my possession since I saved it from the trash bin. After my grandmother's death my Mom and her sisters started to throw away about 200 of my grandmother's photos they couldn't identify.