Which DNA test should I take?

Which DNA test should I take? Is it worthwhile? What will I learn?

I see these and similar questions asked dozens of times a day on mail lists, forums, and social media sites. Some people recommend what worked for them, but what was "best" for us may not be best for the person asking today. 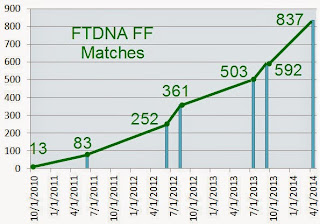 Chart of one person's number of Family Finder matches at Family Tree DNA over several years.
A DNA test is the genealogical resource that keeps on giving: as more people test you will get more matches. After taking a DNA test you need to periodically look at data for your new matches. You never know when the person whose DNA can solve your hardest genealogical problem will take a DNA test.

Knowing how DNA test results could contribute evidence to answer your genealogical question is critical to knowing which test to take and where. So here are some specific questions with the answer I would give today. As companies change their lab procedures, sequencing techniques, databases, tool offerings, customer service, and we learn more about DNA, these answers might change. As new companies are formed, these answers might change.

The three biggest genetic genealogy testing companies include Family Tree DNA, 23andMe, and AncestryDNA. For anthropological testing that may also be applied to genealogical research there is the National Geographic Genographic Project.

Many other companies also offer specialty testing and analysis services for those unable to do the analysis themselves. The "big three" will be the primary focus of this article. For the tests that are offered by all three companies, the base price of the tests is the same, although sale prices can provide significant savings. To find out about sales read the posts of genetic genealogists on blogs, Facebook, mail lists, and forums.


Yes, unequivocally for most of us.

For yourself, how much you will learn depends on how much effort you are willing to put in to learning how to use DNA evidence. For more information see Debbie Parker Wayne, "Disappointed in DNA test results?," Deb's Delvings Blog, posted 16 September 2013 (http://debsdelvings.blogspot.com/2013/09/disappointed-in-dna-test-results.html : accessed 3 January 2015). There are hundreds of blogs posts out there from dozens of genetic genealogists on how to use DNA test results.

For others, your DNA and family tree may provide the match needed to break down a long standing brick wall. Or for someone who has no knowledge of her biological parents to connect to family.

For the future, one of the best reasons to take a DNA test is to "bank" your DNA or the DNA of elderly relatives for future testing. As much as we know today about DNA, more will be known in the future. Our grandkids and great-grandkids may learn more from our DNA than we will be able to learn.

Today, Family Tree DNA advertises DNA samples will be stored to allow for testing in the future. Other companies may store leftover biological material, but they do not allow additional tests to be ordered at this time. No company can guarantee there will be enough stored material or viable DNA material for a particular test. But if the material is not stored and made available then there is NO chance of testing once a relative is deceased.


Is one company more economical than the others?


What will I learn?


A DNA test will provide several types of information: a list of other people in the database of the testing company who have DNA that matches yours and values for the DNA markers tested. Depending on the type of DNA test the markers and values will vary. For some test types, the companies provide an ethnicity prediction based on comparison to the population database used by the testing company.


What kinds of tests are offered for genetic genealogy?


Y-DNA tests have been offered for about fifteen years now. Only men have Y-DNA; Y-DNA is passed from father to son. You can only learn about the direct patrilineal line of the man tested, and Y-DNA can be traced back many generations.

Mitochondrial DNA (mtDNA) tests have also been offered for about fifteen years now. Both men and women have mtDNA; mtDNA is passed from mother to all children; only daughters pass mtDNA to the next generation. You can only learn about the direct matrilineal line of the person tested, and mtDNA can be traced back many generations.

Autosomal DNA (atDNA) tests have been widely available for over five years now. Both men and women have atDNA; atDNA is passed from both parents, they inherited it from both of their parents, and so on. You can learn about every line on the pedigree chart of the person tested, but atDNA can only be traced back easily and reliably a limited number of generations. As you go back more generations it generally gets more difficult to use atDNA for genealogical evidence.


What can you learn from a Y-DNA test?


What can you learn from an mtDNA test?


What can you learn from an atDNA test?


Which company should I test with ... if I am interested in testing myself and I have no specific goal in mind? I just think DNA testing is cool and I want to do it.


Take an autosomal DNA test with all three of the "big" genetic genealogy testing companies. If you also want to contribute to anthropological discoveries for the human race test at National Geographic Genographic Project.

The only test offered by three of the companies is primarily an autosomal test so you don't have to know a specific name for the test. Family Tree DNA offers other tests so you must order a "Family Finder" test to get the autosomal DNA test there.


Does my ethnicity affect which company I should test with?

Some factors to consider include (statements based on my personal experience and statements made by other genetic genealogists that I trust, your experience may vary):


Will I learn about health related issues from a genetic genealogy test?


If you are interested in learning health related information, testing at 23andMe or AncestryDNA will provide more medically-significant markers. The data from the testing company can be analyzed by Promethease or other third-party tools. At some point in the future, 23andMe may again provide links to the medically significant information without the need for a third-party tool.


Which testing company is easiest? I don't have time to learn how to analyze DNA.


Testing at AncestryDNA may be the easiest for those who are not willing to invest time in learning how to use DNA results effectively for genealogical research. A public tree on Ancestry helps to get the most from a DNA test taken at Ancestry.

AncestryDNA does not provide the detailed segment data needed to make use of the most popular DNA analysis tools. Those who have tested at AncestryDNA and want to do detailed analysis must upload the raw DNA data to a third-party website (such as GEDmatch) or use third-party utilities (of which there are many). Comparisons can only be done with others who have also uploaded to the same site.

You can learn SO MUCH MORE from your DNA tests if you are willing to invest some time in learning how DNA answers genealogical questions. The image above labeled "Partial Display of Mapped Chromosome Segments" shows how some are mapping particular segments of chromosomes to specific ancestors using detailed DNA analysis and tools written by genetic genealogists with programming skills.

Choosing a testing company when you can't afford to test at all three may be affected by the following considerations.

Is support via telephone an important consideration?


Both Family Tree DNA and AncestryDNA provide telephone support, but the knowledge level of the customer service representatives covers a wide spectrum. In my experience and anecdotally, Family Tree DNA excels in both telephone and e-mail support to customers, quickly getting more knowledgeable persons involved if the first rep contacted cannot answer a question.

23andMe offers support online and not via telephone. Their customer support representatives have a reputation for providing knowledgeable and useful answers.


Are you testing an elderly relative who has trouble producing saliva?


Family Tree DNA uses a cheek swab to obtain a DNA sample (the tester rubs the swab on the inside of the cheek, cheek cells collect on the cotton swab). This is easier for many elderly people. As a special request option, 23andMe offers a test kit that requires less saliva than the standard test.


The ways we use DNA and the tools we use will continue to advance and change over the coming years. We will all need to continue our education as those advances come.