Cost of DNA vs Documents

I keep hearing people complain about the cost of DNA tests. People saying that we cannot champion using DNA for every genealogical relationship problem because researchers cannot afford it.

CC0, 2016, Debbie Parker Wayne
(That is not a word we use often in Texas, but I can't use the word in public you would hear most often in Texas to express this sentiment.)

My last research trip to the Mississippi Department of Archives and History (MDAH) and the Copiah County Clerk's Office cost me over $800 (gasoline for the car, six hotel nights, meals, photocopy costs because the MDAH still does not allow digital cameras) plus the loss of seven days time when I could have been doing client work or preparing for a DNA workshop. The $800 breaks down to about ten dollars per page for each photocopy I made. In my mind I may think those pages cost me only twenty-five cents each, but the real cost includes the travel costs. I am not even adding in the lost income. And I needed all of those pages, not just one or two, to prove my case to a reasonable level.

On that trip I focused on proving the relationship between one man and his parents.

©, 2016, Debbie Parker Wayne
My Family Finder test from Family Tree DNA (which now costs only $79) gave me much more definitive proof of the relationship I was trying to prove on that research trip. I have multiple cousins on my match list who confirm this relationship using a record that never lies or gets lost or destroyed—DNA. 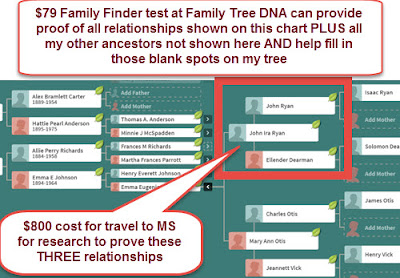 And the DNA test results also provide evidence for dozens and dozens of other relationships, not just the one I was focused on during my Mississippi trip.

©, 2016, Debbie Parker Wayne
We need both the documentary evidence and the DNA evidence to prove most relationships. But the DNA information cost me a lot less here. We should consider the true cost of research, not the cost to photocopy one page or order one vital records certificate, when making our own cost benefit analysis as to whether a DNA test makes sense for us.

Reasonably exhaustive research using DNA sometimes requires multiple targeted test-takers, but much of your tree can be confirmed by testing only yourself then using the trees and the shared DNA of those on your match list. For me, the DNA test has been well worth the cost, even priceless. 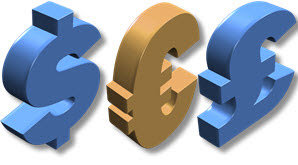 Posted by Debbie Parker Wayne, Certified Genealogist® at 8:23 AM