You can participate in a survey and provide your opinion on the Proposed DNA Standards through a Google Docs survey linked from https://bcgcertification.org/proposed-dna-standards-for-public-comment/. Please leave comments by 23 July 2018 explaining your agreement or disagreement with the proposed standards. Comments will be used to modify the standards as needed before acceptance and publication. 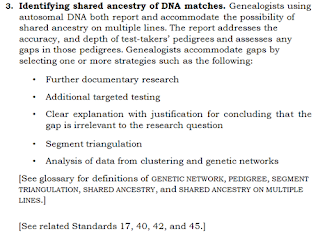 What does this all mean? Standards are written formally and most of us understand informal language better. Breaking down each segment makes the meaning more clear.

The first thing many researchers who share DNA do is compare pedigrees (family trees) or surname lists looking for a common ancestor (or an ancestral couple; the term common ancestor will be used for simplicity even when an ancestral couple may be the source of a DNA segment). The first common surname, person, or couple found is often assumed to be the source of the shared DNA segments. That assumption may be right or wrong. More evidence is needed to determine which is more likely.

Genealogists must also consider that two test takers who share DNA may not have inherited all of that DNA from one common ancestral couple. If two test takers are related in more than one way (such as through pedigree collapse or endogamy) this can be difficult to determine except with thorough research and correlation of the DNA and documentary evidence. 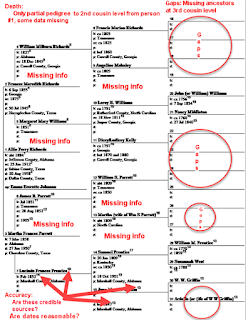 Board for Certification of Genealogists, "Ethics and Standards," scroll down to "Genealogical Proof Standard (GPS)" (https://bcgcertification.org/ethics/ethics-standards/).

I have held Certified Genealogist® credentials from BCG since September 2010. I helped form the BCG Genetic Genealogy Committee to discuss DNA standards. I resigned from the committee due to personal commitments, but have continued to participate as an adviser, reviewer, and in other ways.

I support the adoption of standards to be used when incorporating DNA analysis into a genealogical conclusion. I support BCG seeking input on the proposed standards from the greater genealogical community using DNA. I see this as a positive step to ensure newly adopted standards will meet the needs of the entire research community. No matter what is adopted, updates will certainly be needed just as research methodology and documentary research standards have evolved over the decades.