I've always felt there is something inherently wrong with a company being able to patent genes. 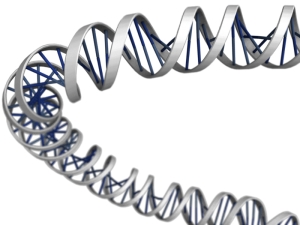 Image credit: James Hedberg / CC BY-NC-SA 3.0
No company "invented" a gene even if they isolated the gene in a lab, discovered the purpose of the gene or the piece of DNA that may switch that gene on or off, or found environmental factors that may affect the expression of that gene. Patenting a gene seems like the same thing as patenting a tree or a flower that grows naturally from the ground with no human intervention whatsoever. Even a unique genetic discovery made by a company isn't done in isolation. It is built on the research that has primarily been paid for by our tax dollars. "We the people" are the ones who should own the genetic data because it is a part of our bodies and we paid for the research to learn about those bodies.

On the other hand, I understand the need for a company to make a reasonable profit from a product they create that may "read" that gene in a person's DNA sample. If another company can make a similar product there is no reason the two companies should not compete for a share of the marketplace. Many companies sell the same kind of tree sapling and flower seeds or bulbs. Many companies sell the same medicine, like aspirin or ibuprofen. Many companies should be able to sell the same genetic test. I believe naturally occurring elements and common ideas or words should not be eligible for a patent, trademark, or service mark. Because the U.S. Patent Office doesn't seem to have enough employees knowledgeable about cutting-edge science and technologies some really dumb patents have been issued in recent decades, in my opinion.

A recent U.S. Supreme Court decision in ASSOCIATION FOR MOLECULAR PATHOLOGY ET AL. v. MYRIAD GENETICS, INC., ET AL held that a "naturally occurring DNA segment is a product of nature and not patent eligible merely because it has been isolated." The scientific community held this ruling to be a victory for women. After the Supreme Court ruling several companies, including the DNATraits division of Gene by Gene, started offering a test for breast cancer genes BRCA1 and BRCA2. Myriad Genetics has sued to prevent these companies from offering tests for these breast cancer genes.

One of the earliest genetic genealogy companies, Family Tree DNA, is a division of Gene by Gene LTD. The president of Family Tree DNA recently asked for help fighting against Myriad:

It's rare that I send 'blast emails', but if there was ever a time in my life that called for a broad based blast, now is that time. I want to share with you an important campaign www.freemygenes.org that I have started, to raise awareness to an alarming situation.

About 10 weeks ago the Supreme Court of the United States (SCOTUS) decided that “isolated human genes cannot be patented.”

That same day our DNA testing company launched a breast cancer test that was far more affordable than previous offered tests. Our precedent-setting reduction in price meant that millions of Americans who previously could not get the test--because their insurance company wouldn't pay, or because they lacked insurance--now had access to a high quality test for breast cancer risk.

Myriad Genetics sued us and others for offering this test and although we are not looking for a fight, we are now forced to defend ourselves and feel morally obligated to bring the world a more affordable test. As a child of the 60s, I can tell you that if there ever was a fight worth fighting, this is it.

I urge you to visit our site: www.freemygenes.org and familiarize yourself with the situation as it has unfolded and I urge you to share this information with others. Our actions are based on two key points: genetic testing should be affordable and available to everyone; and test providers should share data to enable better tests for consumers.

To help us promote the effort we ask that you LIKE our page and update your FB profile picture to reflect our cause. Details are on the website.

I am humbled by the volunteers who have stepped forward to help us with this case so far, including the ACLU, AARP, and the Breast Cancer Action. Now it's your turn. Please do so as soon as you have the opportunity to get online. Thank you very much for your support.


Anyone with family members who have suffered from or died because of breast cancer will understand how important it is to have an affordable test to find this killer disease as early as possible. I hope you support this effort to keep our genes free.