With red eyes brimming with tears, my fourth grade teacher at John Quincy Adams Elementary told us our parents were being called. Even a nine-year-old could sense this wasn't a time to cheer because we were getting out of school early. It was a simpler time when most middle-class kids still had someone at home who could pick them up early when the school called. When we could still play anywhere in the neighborhood and surrounding community without fear. Then she told us. The president had been shot. In our city. The city where we had been safe. Until now. November 1963, when shots were fired from the sixth floor window of the school book depository building, marked the beginning of a changing world. 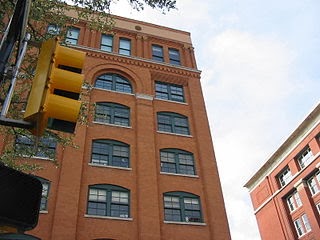 Hobbes747, "The sixth floor window, blocked off by a glass box from the inside, is the second from the top on the far right."1

After my aunt picked up me, my brother, and our cousins who had "working Moms" we went home and watched television. No one felt like playing hide-and-seek or tag or running through the nearby park pretending dinosaurs were chasing us or any of the outdoor games kids played before video games. I still remember seeing Walter Cronkite tearfully announce that President Kennedy had died. There was a new president, a Texan, Lyndon B. Johnson, sworn in with the sad, beautiful widow at his side, still wearing her pink, blood-stained suit.

Stoughton, "Lyndon B. Johnson taking the oath of office, November 1963."2

The aunts had red eyes as they came by to get my cousins at the end of the day. The whole city seemed to be crying. Even the men had red eyes and sniffles. Then two days later there was the television coverage of Jack Ruby shooting Lee Harvey Oswald in the police station basement. It was a confusing time for kids and adults. Our world was changing before our eyes, seen in black and white on a 19 inch television with rabbit ears and vertical and horizontal hold knobs we had to constantly adjust to keep the picture stable.

In 1963 all of the Texans I knew were Democrats. And proud of it. I remember my grandmother telling me she always "votes the straight Democratic ticket just like my Daddy" had done. Texas is different now. The world is different now. I remember for years afterward feeling ashamed of saying I was from Dallas when I introduced myself to someone.3 Looking back, the assassination of President John Fitzgerald Kennedy in Dallas, Texas, seems to have heralded in some of the worst years in American history.4 Riots in American streets, snipers in university towers, more assassinations.5 While I am thankful for many of the advances we have made in our society in the last fifty years, there are some of those kinder, gentler, simpler ways that I miss.

This day, 22 November 1963, is my first memory of a political event. During the sixties and seventies we worried about how our world was changing and becoming more violent. Knowing that things eventually got better gives me hope that the current political problems will someday be resolved, too.

It is so important for all of us to write about our life memories and pass this to our descendants. Genealogists spend our time studying the history of individual lives, micro-history. We know how thrilling it would be to find a journal or diary written by one of our ancestors. Give that thrill to your descendants. Write once a day or once a week about some memory from your early life and collect those writings. Don't let your stories be lost while you concentrate on finding the stories from an earlier time. What would you like to know about your ancestors' lives? Write about those same things in your life. Someday you will be an ancestor and your story should not be forgotten. 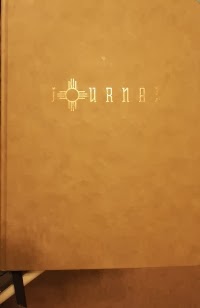 Journal, photo taken by author, 19 November 2013.
For help finding ways to write and things to write about see: