For "DNA Standards - Part 1" see https://debsdelvings.blogspot.com/2019/03/dna-standards-part-1.html. In the first part I paraphrased the standards for using DNA evidence for genealogy into bullet points.

Prior bullets are discussed in other parts of this series:

In "DNA Standards - Part 6" I further discuss the seventh bullet. The main bullet indicates considerations when using DNA to help answer a research question; sub-items explain what is needed to accomplish the tasks defined in the main bullet:


These discussions are likely to continue for the next few years or longer. In my time in the genealogical world, the same kinds of discussions took place when computers first began being used and again when so many records became available online. The genealogical community made it through those changes which were major transitions in how we work. I suspect we will make it through this "crisis" in time to be poised for the next one that will surely come.

Additional bullets will be discussed in other parts of this series: 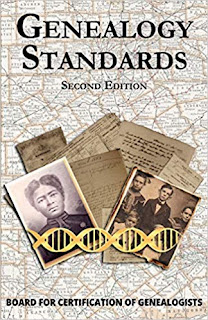 Only BCG provides official answers on what it expects to see in application portfolios. No one, not even members of the BCG Board of Trustees or associates helping at exhibit hall booths, speak officially for BCG. For specifics on what BCG expects to see in portfolios, please use BCG’s website, blog, newsletter, and other means of communication: